Here you will find all the latest news about Mainland's awesome clubs, activities, and extra curriculars! 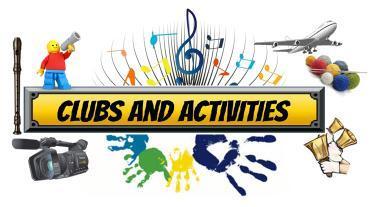 Saturday November 2, 2019 was a day that made Mainland Marching Band history. But what was the week like before they left for Hershey, PA? Tuesday, Wednesday, and Thursday were all practices from 6-9pm having to run through the whole show two to three times. We spent Halloween night practicing, but still got to celebrate by dressing up and eating candy. Friday was filled with excitement from the students because they knew that after school at five, we got to leave for Nationals and put all our hard work on the field one last time. There were last minute bag checks, there were gifts given, there were band kids panicking to find their uniforms, it was all chaotic. The time came when the busses had arrived, and we finally had to leave. 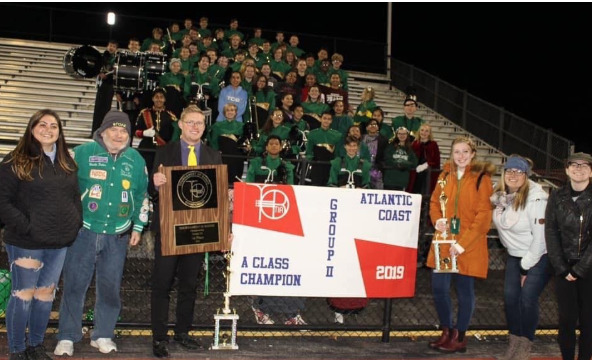 It took about three hours to get to the hotel, and the bus ride was filled with joy and people sleeping. Once we had arrived, we had to unload all the luggage and check into the hotel. We had time to ourselves to relax and eat before we had to gather again for the senior skits/speeches. Senior skits/speeches are when the seniors plan skits to do about the season or past seasons and they say speeches about their time in the marching band. Show day was here, and we started it out with breakfast, packing, stretching, and playing some games. To pass time until we had to be at the school we were performing at, we went to a local mall and spent our time there. We left and once we got to the school, we unloaded and got to practicing. We practiced our marching, the band warmed up and practiced the music and parts of their visuals, and Guard stretched and practiced our work. The rifle line spent most of the time working on their work that they had just learned the past weekend.

Finally, it was performance time the Guard had get our designated props and line up at the entrance to the field. Nationals’ was completely different this year compared to last year because last year it was raining, and we performed earlier in the day. This year it wasn’t raining but still cold, and we performed later in the day. For me, it was nerve-wracking waiting with our backs to the field to go on. Then it was the time we had been waiting since June for. The 8-minute performance went by incredibly fast, and our adrenaline was high. We went on second to last, so the band went to the stands to wait, and Guard got to go back and get our jackets and put our equipment down. The biggest moment of the day was here, the awards, there were 22 bands to get through. When they called second place, we knew that this was the moment we get second place or win it all for the first time. Then, they called East Allegany for second place and everyone was ecstatic because we knew we just had made history. We didn’t just win first place; we got a score of 95.540 with high music and first in visuals. It was probably one of the most exciting days all season. 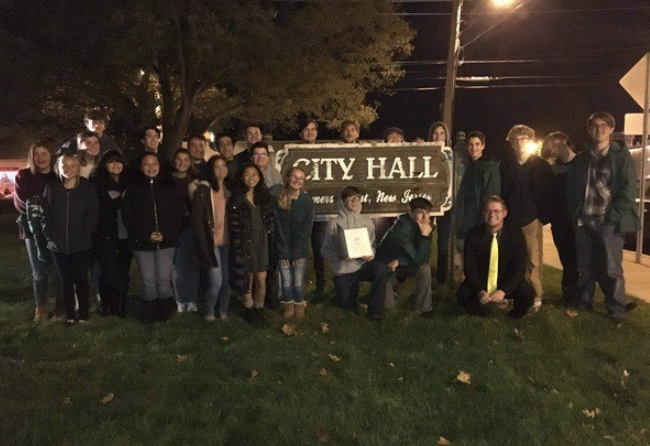 With the title of ACC championships for the first time in Mainland Marching Band history, there came recognition.  We recently got recognized at a Somers Point City Council Meeting. Winning this title made all our hardwork worth everything, even when things got tough. Also, going into next season with this huge title it will put pressure, but with hardwork the Mainland Marching Mustangs can overcome any challenges in the way.

[Photos provided by the author]

In early December 2019, many students including myself, went on a trip to New York City with Mainland Regional High school’s Italian Club. The purpose of this field trip was to go see a very popular show on Broadway, The Phantom of the Opera. The trip was lots of fun and was quite a memorable experience.

The Phantom of the Opera is a romance story about two people you know can never be together, it tells the tragedy of a man who is feared by all just because of his distorted face. With such a handsome voice and an grotesque appearance, he hides his face behind a mask. The show has so many amazing actors and actress with outstanding voices. The musical was written by Richard Stilgoe, has music by Andrew Lloyd Webber, and lyrics by Charles Hart. Since its debut on January 26, 1988, the Broadway production of The Phantom of the Opera has played an unprecedented 30 Years and grossed over $1.1 billion with total attendance of 18 million. Entering its fourth decade, it remains a box office champ and continues to play with no end in sight. This show originated from a novel by Gaston Leroux. It is not only a novel, and a musical, but it also became a movie, which was released in 1998. The show is on multiple touring companies that travel the country and is also enjoyed internationally. The Phantom of the Opera is revered as a classic and many would recommend that you see it.
Many people went on this trip, including students who aren’t in Italian Club and some who don’t even take Italian. Students are always welcome to come on the field trips with us and if you would like to, you can go see Mr. Romito in room W4. To any that missed this opportunity, we will be going on the same field trip in May. I encourage all Italian students reading this, to join Italian Club next year because it isn’t very time consuming and it is very fun. The Italian Club meets every Wednesday during unit lunch and the meetings are only about five to ten minutes.
In conclusion, this field trip to New York City was very enjoyable and The Phantom of the Opera is a great show that I recommend. This is one of many field trips and I hope that more students will attend these events in the future.
Photo Credit: www.newyorkcitytheatre.com

Support Our Troops Club Says Thank You To Our Veterans

Mainland's Support Our Troops club has been a staple here for over a decade with Mrs. Jo Carney as its advisor. Mrs. Carney and her selfless students collect for, put together, and ship care packages to local service members overseas, specifically in war zones. The club also hosts special event nights in conjunction with some of our teams such as football, wrestling, and softball in which service members and veterans are recognized and items are collected to support the club's mission. We here at  Hoofprints would like to extend a heart felt thank you to Mrs. Carney's club and for all you do for veterans and service members both locally and overseas! Also, we join the club in its gratitude to veterans for their service.
Recently, on Veterans Day (November 11), the Support Our Troops club hosted their annual Veterans Day breakfast. Mrs. Carney explained that this was one of the largest that she has been a part of over the last ten years. Over 90 local veterans from various organizations were in attendance. These organizations include: VA Outreach that provides services to veterans, the Legion Riders, Vietnam Veterans Association, Somers Point VFW, and many other local veterans. New Jersey State Senator Chris Brown was also a guest at the breakfast. The Support Our Troops club would also like to thank the Show Choir and Wind Ensemble for being part of this event as well. Over 50 Mainland students came together to help make this event possible. Click below to see a gallery of photos from the wonderful event. 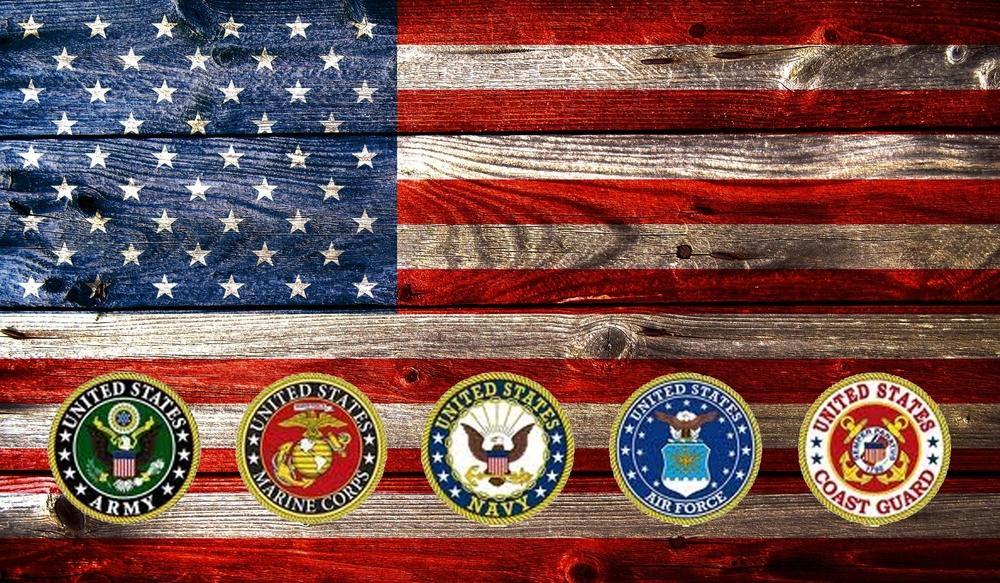 It has been 5 years since Mainland’s Marching Band has taken home the title of State Champions and Regional Champions, but Saturday October 19 and Sunday October 20, 2019 the band took it home again. These wins are a result of a dedicated band and color guard and all the work they put in. You could be asking yourself, how hard do they work, and here is an answer to that. The Marching Band’s rehearsals start in June, every Tuesday and Thursday from 6pm to 9pm. Then they have mini-camp the week before and after band camp; band camp is 12-hour long practices for a 5-day week. Once band camp and mini-camp are over, they get back to a regular schedule of Tuesday and Thursday rehearsals. If you live close enough to the school, you can hear the band practicing; while the band learns and memorizes their music, the guard learns and memorizes flag work. They perform every home game on Friday nights, and then wake up early the 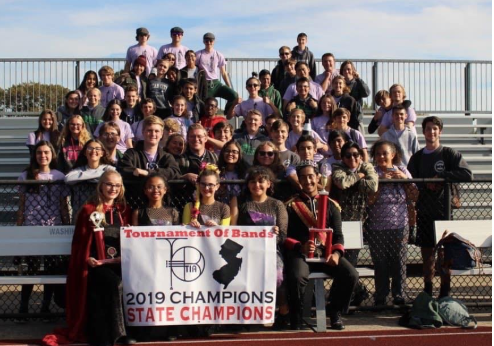 next day to compete Saturday and sometimes Sunday.

Being in Guard myself, I can say that the environment this year is a lot better than it was last year, which plays into the winning streak. For example, last year Color Guard did not have a proper instructor and the captains had to rewrite all our work; this year we have an amazing writer and instructor for Guard that have taught us a lot and make the season great for the veterans and the rookies. The staff overall this year has been amazing because they believe in us a lot so they push us to do ur best. Compared to last year, this personally has been the best season for us. Hearing “Mainland Regional High School” for first place was astonishing because, most of our show wasn’t on the field. Also, before our first competition we were worried because of the schools we were going against, but once hearing our score and hearing the judge's tapes everyone knew that if we kept working hard, we can keep getting better every weekend. The picture above is right after we won State Championships, the photo is from the Marching Band group on Facebook.

Leading up to being State and Regional Champions of 2a, it took six competitions to achieve the scores that put us in an undefeated spot this season. Scores are based off different aspects of the performance like marching, visuals, and music. Here are the scores from our season so far: Competition 1- 79.3; Competition 2- 84.86; Competition 3- 83.55; Competition 4- 88.305; Competition 5- 90.185; 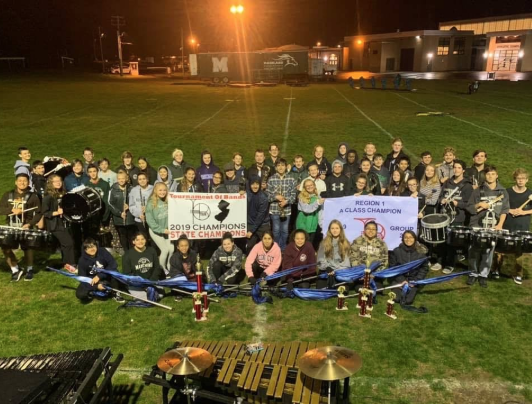 Competition 6- 90.965; States- 91.71; Regionals- 92.755. Breaking the score 92 means that the band gets promoted into open class which is a more competitive group. Being undefeated this season has made not only mad us recognized by the school and local newspapers, but we are also known by other bands in different groups. The picture on the left is from a rehearsal showing our Regional and State Champion banner and our trophies from this season, I got this picture from Facebook, picture credits to the Band Director, Mr. Ratcliffe. Having an undefeated season like this one makes it more nerve wracking for Nationals because, you never know how the performance might go for us and other bands. Mainland has never won Atlantic Coast Championships (ACC’s), the name of Nationals, and being undefeated this season we must push ourselves harder and make our performance on November 2nd the best one yet. 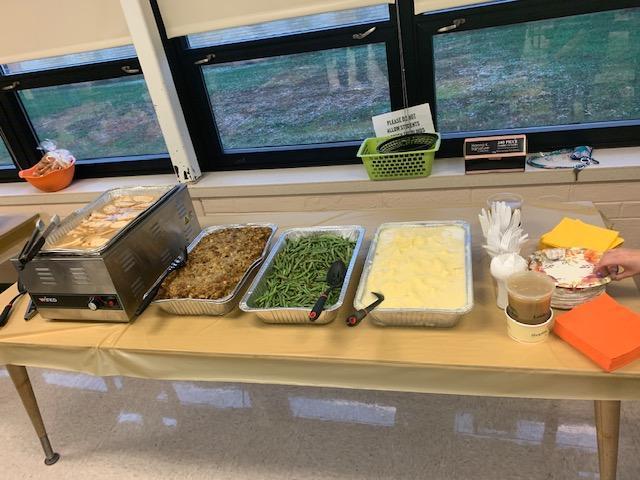 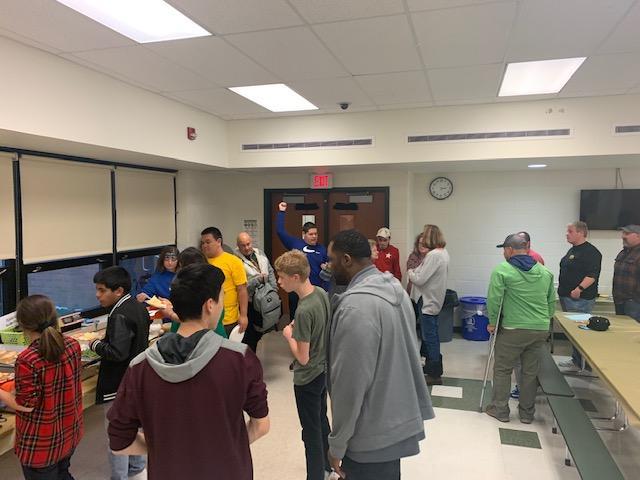 continuing with our annual tradition, students and their families enjoyed all of the traditional Thanksgiving fare. 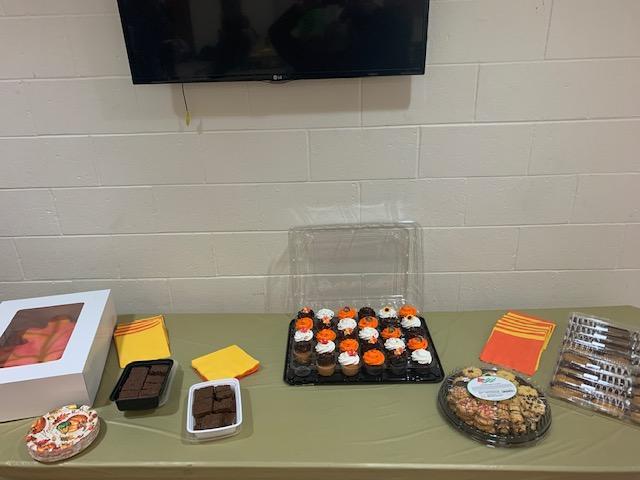 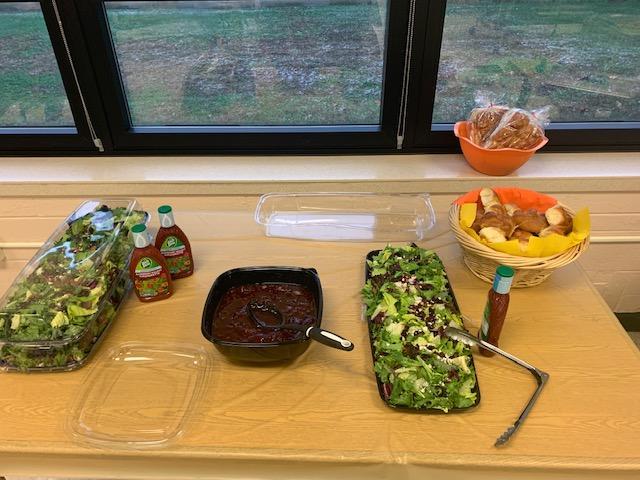 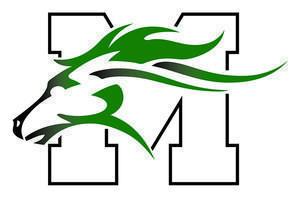